Close Encounters of the Chocolate Kind 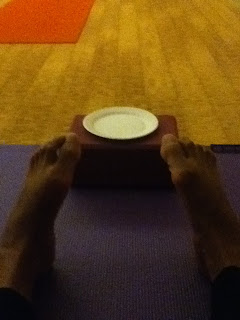 
Deleting the "Sent From My iPod" message that automatically appears on the bottom of e-mails I send, while juggling a Clover-brewed Grande Jamaica Blue Mountain coffee from Starbucks, so I can begin this post on the train, you would think I forgot where I had been....

Tonight was my prelude to even more encounters of the chocolate kind; tonight was my Yoga + chocolate class at Pure Yoga West. Pure, reputed to be the best yoga in the city, did not disappoint, and I am certain I have never been in a sexier yoga studio. Plush seating and Eastern symbolism were rampant, but I chose to settle on my mat in the empty studio way before the class started to embrace the entire yoga experience, especially the quiet beforehand....

The class was led by Dave Romanelli, whose mantra is not to get caught up in things that interfere with enjoying life--enjoy the moment. I connected with him on his website, where he explained missing a crucial moment at a ballgame when he left early to get home earlier--what was the rush he questioned? His class was very intense, as I read online it would be.  My body is still responding to the poses he had us hold as he told anecdotes. I am thinking these poses are challenging-- has he forgotten about us during the anecdote?! No, he was connected with us at all times, challenging, pushing. At one point, he said not to be mad at him, that we could get out of the pose at any time, as well as the fact that happy people are perfectionists and lazy people generally are not happy. My cross training in different types of yoga helped develop my stamina so even when it burns--as Dave said some poses would--I held up pretty well.

As this amazing class wound down, the sensory overload kicked in! Dave came around and rubbed a special therapeutic lavender oil on us that he gets from Arizona. I keep lavender at work on my desk so I felt very at home.  (I just sniffed my arm and it is still redolent with lavender oil.)

Then the cherry on top, indulgent pieces of Vosges Haut Chocolate, which is amazing. As Dave pointed out, we are lucky enough to have storefronts in the city. My last two trips to the Met were punctuated by trips to Vosges Upper East Side location. Eating them the way the package instructs, while having it described to us outloud and the chocolate's notes dancing on my tongue...my eyes closed...ahhhh...
My body and tongue remain stimulated by yoga plus chocolate, and it is only the beginning--stay tuned for another encounter of the chocolate kind coming soon....


Photograph by F.Solomon
Posted by F. Solomon at 1:51 PM