The Myth of Being A Writer 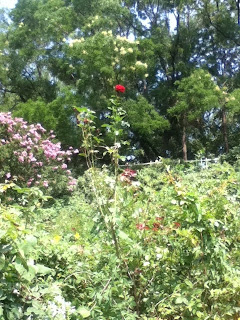 Often being a writer, or being introspective about myself as a writer, usually involves me thinking that I do not write enough, and beating myself up about time that I could have been writing and was not. Thinking that if I prioritized time that I could really finish something. The story that I have been writing in three states and still am not sure if I am in the middle or what is going on....

Wandering in museums, a friend of mine sends me an e-mail of a couple in a black and white photo. Surely this couple would have, in our modern times, described their relationship on Facebook as it seems complicated given the caption beneath the photo, and indeed the photo was worth of a story, something that I could make up!

And so there I am in the International Center of Photography looking at their amazing Elliot Erwitt exhibition with the cool black and white photo sent from my friend. The same friend who allowed me to lead as we were walking streets in Chelsea and I am taking photos as I go for the story that I have dragged through almost four states now.

A co-worker of mine tells me "train stories" to inspire me. Today's story of a woman telling the very intimate details of a one night stand did inspire me. Many of her stories have inspired me; plus, I have my own train stories. I watched a couple last week on the train; well, I assume they were a couple. His very avid approach to her. Her train leaves as she looked at him; resisting a kiss and then very definitely accepting, and then kissing him! I was mesmerized and am sure that that scene will come back to me at some later time.

A conversation with another friend, in which I told him something that he thought was surprising, led him to accuse me of making up a word! I said I am not making this up, and he said that I was a writer; he just assumed that I made a lot of things up. Him saying to me that I am a writer, just accepting that even when I have told him of my struggles, gets to me.  He still sees things and tells me about them so that I could make up a story about this thing or that. His stopped telling me about himself; saying he did not want to see his reflection in a story of mine. Which I would never do...

...but I do absorb a lot. Writer goggles on, everything is fodder. Everything has a bit of fairy dust and sparkle. I am so thankful for the gift -- to see a story, to know how to "feel" a story.

Anais Nin said we write to taste life twice, in the moment and in retrospection. As a writer I am greedy for experience and blessed for that. Being a writer opens me up as a person to life -- a bud that is never tight --, and I am thankful.