March is Women’s History Month and I would like to honor two extraordinary women in romance fiction –
Barbara Cartland and Corin Tellado.

“Love conquers all” – that was the overall message in each of Barbara Cartland’s numerous romance novels. I devoured them in high school. In fact, my collection was bigger than the local library’s or the bookstore’s. She had her own line of romances -- thin volumes with the most romantic covers imaginable. I read one a day!

A relative of the late Princess Diana, Barbara Cartland sold over 100 million books in over 36 countries in as many languages. But she didn’t just write romance novels; she also wrote books on health and vitamins; and even penned several cookbooks. She is in the Guinness Book of Records for selling the most novels worldwide.

Barbara was also very involved in her local community, and her efforts on behalf of the Gypsies became an Act of Parliament, granting them permanent homes for the first time in their lives and allowing them medical benefits and schools for their children. In 1981, Queen Elizabeth made her a Dame of the Order of the British Empire for her contribution to literature and for her work in the community.

Dame Barbara had an award-winning formula for her romance novels – young, innocent heroine (usually a princess or Lady), in dire straits until the strong alpha hero (usually a prince or Lord in disguise) rushed to the rescue. Most of her novels were set in England, though there was a handful with European settings, and another handful that started in the United States until the hero inherited and so returned to England to take his rightful place in society and find a dutiful bride.

I met Dame Barbara on one of their trips to New York. Rizzoli Bookstore threw a grand party for her. She was elegantly dressed in her signature pink with a great hat. She was gracious and very direct. When asked for writing advice, her answer was succinct: write about love.

At her death, Barbara Cartland left 160 unpublished manuscripts. Her son Ian has organized them into “Barbara Cartland’s Pink Collection.” Fans can subscribe to the collection to receive a monthly book and a bonus one for Christmas. To learn more about this great Lady, visit www.barbaracartland.com. 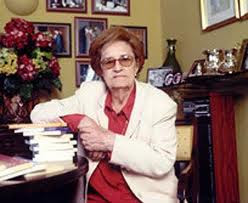 Born Maria del Socorro Tellado Lopez, Corin has been compared to Barbara Cartland, as she is the most prolific writer in all of Spain. She earned a spot in the Guinness Book of Records for selling the most books written in Spanish, but from there she strays far from Barbara Cartland’s shadow.

Corin was a pioneer. A feminist before feminism was cool. She wrote about modern women. Her novels were set in the present and featured as much angst as romance. Maybe because she was a single mother of two and had no time for nonsense.

Her heroines had passionate natures; had bad marriages, bitter divorces; loved the wrong men; had problems with their children; and fought their way to a happy ending. These plots may not seem like such a big deal today, until you consider that in the 40s and 50s, Spain was under strict military rule and literary censorship was a political tool. But Corin prevailed. One of her novels was turned into a movie and won Best Picture at the San Sebastian Film Festival in 1984. In 1996, Spain’s TV network adopted several of her novels into what we today call made-for-TV-movies.

Her novels were sold in paperback form and as photonovels (think comic books but with much better art). Her novels were serialized for radio, television and magazines. In fact, for over three decades the Spanish magazine, Vanidades, featured a new full length romance novel from Corin Tellado every week. These magazines were distributed all over Spain and in Spanish-speaking countries, like Puerto Rico.

And that is how I discovered Corin. My grandmother introduced me to her work. My aunt had a beauty parlor and she ordered the magazine for the shop. My grandmother would read them first and share them with me. She wanted me to also read Spanish authors, and here was one who wrote about my favorite subject – romance. But Corin’s stories were ones I could relate to because they were about young women who graduated from college, worked and were looking for love. Their lives could have been my life!

Recently, I discovered that Corin also wrote erotica under the name of Ada Miller. These were written in English and then translated into Spanish. Ironic, I know. For more information about this amazing woman, visit www.corintellado.com.

Maria wishes she was as prolific as these two great Dames, and is getting her butt back in chair and filling up those blank pages across from her. When not tied to her pen, Maria is the President of the RWA/NYC. She writes contemporary romances under her own name, and erotica under her pseudonym of Del Carmen. Her work has been published by Cleis Press and Ravenous Romance, and has appreared in magazines, including Star, Penthouse and Cosmopolitan for Latinas. Visit her at www.marializaferrer.blogspot.com, www.mydelcarmen.com and www.4horsewomen.blogspot.com.