This is a scene from a work in progress.  Enjoy.--mcf 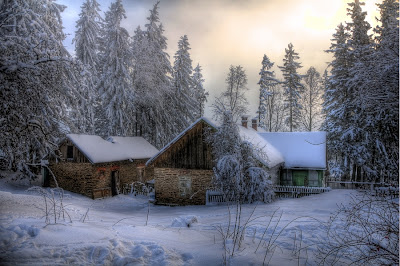 The girls loved the cabin, the snow, the fireplace and the two weeks away from school. They were ecstatic, and having fun running around looking into rooms and closets with equal zeal. The girls. His daughters. Twin bundles of joy that had turned his life upside down less than four months ago.

His chest still tightens whenever he thought of them.

Jon was sterile, had been for the past ten years. Thoughts of having a child of his own had died a hard death when he’d been diagnosed with chicken pox and came out of it well, but sterile.

He had met some nice women with children. There was one in particular that he thought may have been the one. He knew now that it was the boy he had wanted and then the mother. It would not have been fair to her, but Jon would have been a good father and husband.

Now, it turns out, that he was a father-- a father of twins.

They had changed his life with that one phone call.

He remembered it vividly. He’d been packing. He’d lost the child and the woman he wanted so he had applied for a transfer at his accounting firm, and had tendered his resignation at the grade school.

He was packing when the phone rang. He thought to ignore it, but then changed his mind in case there was an emergency at work, at the school where he coached pee wee soccer, or in case his ex-girlfriend had changed her mind and wanted him back.

“Are you Jonathan Cruz?” A small voice had asked over the phone.  There had been some rustling, and then another small voice got on.

“Did you go to Platt High School? Do you know a Helen Soto?

Maria C. Ferrer is happy to join the talented authors at Tuesday Tales. She is a member of the Romance Writers of America /New York City chapter and the Latino Authors Writers Society. Maria writes contemporary romance under her own name and erotica under the pen name of Del Carmen. Her short story, “Geeky Bowtie,” was published in the GEEK LUST anthology by Ravenous Romance. Plus, her work has appeared in Star, Cosmopolitan for Latinas and Penthouse magazines. Visit her at www.4horsewomen.blogspot.com and www.mydelcarmen.com.