NYC: SHAKESPEARE IN THE PARK(ING) LOT 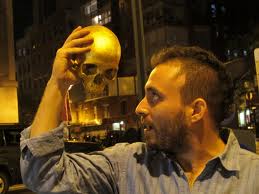 This was my third performance at Shakespeare in the Park(ing) Lot, and yes, it was in an actual parking lot. The production was fun, adventurous and inspiring. I’ve seen “Hamlet” at least five times; I’ve even read it twice; and yet there were still new things, new nuances I caught last night.

Alessandro Colla was mesmerizing as Hamlet and Amanda Dillard made a wonderfully tragic Ophelia. The whole cast was amazing. Hamilton Clancy did an excellent job as producing artistic director.

The stage consisted of three gossamer curtains, two small sitting benches, some bottles with dry flowers inside and a couple of blackened skulls. The actors wore every day clothes. For example, last night Hamlet wore jeans, t-shirt and cross trainers, all in black. His mother Gertrude had on a well-fitted ivory dress, knee-length with a colorful Chinese parasol; the usurper King sported slacks and an army jacket with tons of medals; and the poor Ophelia looked like a fairy princess in a strapless, filmy white dress and flowers in her hair.

Simple set, simple clothes, but the Bard’s own words. The mix of old and new worked beautifully. And though the stage lights were provided by ConEd and the theatre seats were garden chairs, the production was compelling and the characters full of passion – Shakespeare at its best.

Heck, for all we know, THIS was probably how the original plays were staged at the Globe for the masses of people in times of olde. And, the best part of last night’s performance….it was FREE! (Donations welcomed.)

I heartily recommend watching Shakespeare in the Park(ing) Lot. The performances are the best for Off-Off-Really-Off Broadway. Hamlet runs thru August 13; Thursdays thru Saturdays, at 8:00pm at the municipal parking lot on Ludlow and Broome Streets (take F train to Delancey). For more information about the company and their full schedule of their 20th Season, visit http://www.drillingcompany.org/.♥


Press photos from Google Images.
Posted by Native NYer at 4:20 AM