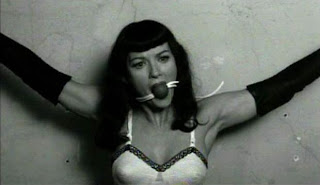 I believe that everything happens for a reason. Such as why my yoga class was canceled and I decided to indulge myself in its place by buying Apple gadgets and essential oils. It was in the store with said oils that I met a model--an alternative model who does fetish. I was fascinated. Recently I began a short story about a model who almost suffocated in a corset. I had read as Diane Kruger described in Allure magazine that feeling and it inspired me. I wrote the first few lines organically, after combining it with a piece I was working on that I had gotten stuck on. Meeting this model who told me that yes it can happen, that you can suffocate while wearing a corset if a photographer does not know what s/he is doing. She also described the beauty in what she does and how her background made her to want to make people think about expressions of their sensuality in different ways. She believes that people are creative in every other part of their lives but when it comes to sex and intimacy they are one-sighted. I read, write and watch erotica. I think a lot is learned about people in how they express themselves in that way.

I had the pleasure of spending time recently with Thea Devine about whom I am going to be doing a Bits and Pieces on, my regular column at the RWA-NYC blog. She changed the way that I think about everything with my craft. I identified with the way she described love and sex and I found my eyes wider because of her. I even got a tiny black Moleskine to write down observations that I make and--surprise, surprise--there are only sensual bits so far! Maybe they will make it into a story but they definitely show me how I see the world and what inspires me...

I am taking an art cours 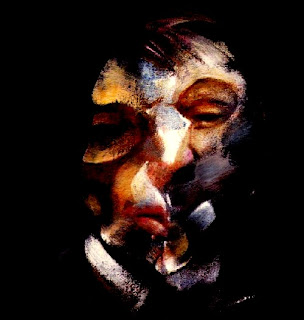 e focusing on Francis Bacon and for the most part I do not think anyone would describe Bacon as "lovely" or "sexy." When I saw my first Bacon I thought, why would anyone like that?! But I changed my mind about him. I love the rawness of his work--there is a lot lovely and sexy about him. Not even considering that a lot of his work focuses on his lover who was his muse, or that his paintings are featured in the opening credits of the Last Tango in Paris. In my art course, we were shown a Diane Arbus photograph, which I commented on that the two people depicted could not have been a couple because they did not look happy. The instructor said to me that all couples do not have to be happy. I think my mindset was that an unhappy couple would not pose for a picture. But the idea that everything romantic does not have to be happy...When people call me a romantic the last thing they are saying about me is that I am unhappy! I am typing this post on my MacBook with the screen for Before Sunrise minimized, happy for a change that I am able to listen to it and not need to glance at the subtitles. I am fond of the ironically darker love themes in love movies from other countries. Hearing the instructor voice aloud that romance does not have to be happy, it was not that I did not know that, not that I have not explored the themes in fiction and maybe in real life...but to hear something makes it less indelible in my mind. When the fetish model told me you can suffocate in a corset, I had to reread fashion guru Polly Guerin's post about corsets!

I have been writing a lot more since then; the fairly dark love story that I have been working on is developing...which I am going to work on as soon as I finish this post. Every encounter should lead to something that can be transferred to the page or the computer screen.
Posted by F. Solomon at 11:14 AM