Portrait of a Woman Trying to Read and Write 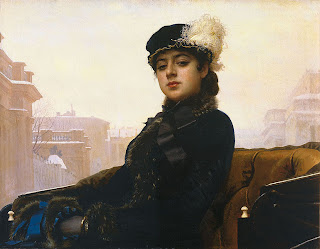 
I fell asleep during sex.

That is I fell asleep during a sex scene in a novel I was reading. I am not going to say what novel I was reading, but I will say I could not connect with the character at all, and it was not pleasing so I abandoned the book--typical Gemini. Amidst all this astrology controversy, I am happy to report that the possible realignment of signs made me even more of a Gemini and not just on the cusp like I am.

So I put the book down. I like romantic erotica best or at least sex that makes sense. Honestly I cannot say that the sex in this story was gratuitous, but I did not care about it. Especially the names of body parts that were given. Spare me.

I was on the train and saw a woman reading Dark Rapture. I love old pulp novels with their titillating (for then) titles and story lines. Her book did not look like a recent acquisition either--I could smell the moldiness of the pages, feel the crackle of the pages that tore as she turned them. The reader was dressed rather retro as well, much like the Kramskoi mystery woman that accompanies this post.

"She sought possession of him, but became his slave instead!"

I read from across the train, happy for my 20/20 vision. I heard someone say that women liked to read historical romances because they like to imagine themselves needing a man in that way, to have a hero to save them. It is their fantasy. I do not dislike historicals, but I like women being able to wear less clothes--I have no energy \to read how long it takes to undress each other in those. So if that is the fantasy, why are novels written like that? Then, I thought to myself, it is someone else's fantasy to be someone's slave and those novels were written to that end.

Fantasies are subjective. I am sure that there are people who would have lapped up the novel I put aside. Maybe it would have grown on me as well. My mom put Kathleen Woodiwiss' The Wolf and the Dove aside, because it did not immediately grab her like Shanna had. She read the book over and over years later, lamented that she had not picked it up earlier so she could have read it more. She'd lay on her stomach reading that book with its crimson edges that almost always tore as she turned the pages, and when I was a teenager she gave it to me to read. No other cover of The Wolf and the Dove will ever be the same for me if it is not that crimson edged book with its orange red cover that I lie on my stomach reading...the fruit does not fall far from the tree.

I read to be inspired, I read what I want to write and I would not have written the novel I was trying to read. The one I started on the train this morning I most likely would not have written either. Reading and writing are commitments.  It is about what you want to see, what you can connect with. I read a lot on the train, maybe the sound of the train rushing is the perfect backdrop to a racing mind. It takes a lot for a book to hold me captive, I am not easily enslaved.

When I cannot find what I want to read in print, should that inspire me to write it myself? Or manipulate my trusty mobile gadget --filled with apps-- that can support me writing a novel on it, even take notes for the outline? Maybe.

Maybe I am too far to catch myself sometimes...