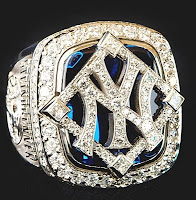 “Isn’t everything in New York unique?” you ask. Perhaps a valid question, but in my forty some-odd years in this city, this was a new experience for me. The setting was Yankee Stadium. What could be more iconically “New York” than that?

But then reality shifted and I entered what I will call the “Alternate Baseball Universe.” Three friends had persuaded me to join them at a Yankee game. (My arm still aches from the twisting.) Now it’s not that I don’t like baseball, but being a life-long, die-hard Mets fan, this was not easy. That, and the one hundred dollar ticket price. But I later found out that the regular price for these tickets was $150 and it included food and soft drinks, so it was really quite a bargain.

I was told before I arrived at the stadium that this was a luxury suite. I had been in one once at Shea and it was quite lovely. A private room for about 25 people with your own bathroom and covered open seating facing the action. It was a playoff game in 2000 and I had gotten the ticket through my job. (Not the romance writing job, but the rent-paying job.) My co-worker and I seemed to be the only ones interested in the game and I got the feeling that the other “fans” were out-of-town business people just there for the free food. When the score became lopsided – I think the Mets were losing by seven runs – the others retired to the comfortable living-room-style suite and watched a football game (!) on the television screen provided. My friend and I remained outside in the now-empty covered seating section, leaning out of the opening, cheering on our team and trying to capture the feeling that we were actually attending a baseball game – a playoff game, at that!

Though the Mets lost that game (they went on to become the National League Champs that year – we won’t talk about the 2000 World Series) it was a pleasant experience. I enjoyed all the hot dogs, hamburgers, French fries and chicken fingers I wanted and even got a free Mets cap to take home.

But back to the Alternate Baseball Universe. Riding the D train to The Bronx, I pictured a similar setting for our Yankee game – a covered luxury suite with an endless supply of typical baseball-stadium fare and all the bottled water or soda I wanted. We had already been told beer was extra. Bummer. When we got to the stadium we had no idea how to find our seats. A lovely young woman with a pin-stripe-adorned “May I Help You?” sign pointed us toward a guarded glass door. That led to an elevator and we got off at the level for “Audi Yankees Club” – that’s what it said on our tickets.

This was not a luxury suite – it was a restaurant seating some three hundred guests! Instead of French fries and hamburgers we feasted on lobster fritters, pan-fried soft-shell crabs, shrimp cocktail as big as your hand, sautéed asparagus and very rare filet mignon with béarnaise sauce. No kidding. Oh, and there were fries – sweet potato fries. The miniature pastries on the dessert bar were as tempting as any delicacy from the finest bakery. But lest anyone feel deprived (or forget that he was inside a Major League ballpark), hot dogs were provided, along with potato chips and popcorn. The food was wonderful and gracefully dished out buffet-style by servers wearing chef hats inscribed with the famed “NY” logo.

Yet that wasn’t the weirdest part. Our seats were arranged dinner-theater style before long tables all facing the field. But between the “regular” fans and us was a huge glass picture window. Here we were, watching a baseball game from inside a hermetically-sealed, soundproof, climate-controlled restaurant. We couldn’t even hear the National Anthem (we stood anyway since they piped in the soundtrack) or the roar of the crowd. It was like watching the game on a humongous TV screen, and to underscore the TV-like ambiance, the play-by-play telecast of the entire game was piped in, too. 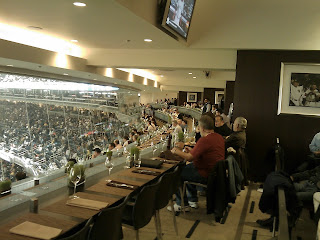 We were attending a baseball game…but it didn’t feel like it to me. During particularly exhilarating moments – the scoring of a “go ahead” run or a breathtaking defensive play – excited fans are often moved to high-five the complete strangers seated near them. Yet this would have felt unseemly within the sophisticated milieu of the Audi Yankees Club. We were there at a ballpark, but not really there. All the action unfolded before us but we were removed from it. Part of the experience and much of the fun of attending a baseball game is to be among the other fans, not separated from them by glass. Fans are collectively referred to as the “tenth man”. We are part of the game and our “root, root, rooting” for the home team helps spur them to action. Sequestered within our opulent isolation booth, we became observers, not participants.

I don’t regret my expedition into the Alternate Baseball Universe of the Audi Yankees Club. (Yes, there were brochures hawking the luxury autos on a discreet rack near the exit.) The food was wonderful and the company agreeable. It just wasn’t an authentic baseball experience.

Now, this is where I usually make some obscure connection from my blog post to my upcoming World War II romance novel. Hmm…. World War II… war…. Well baseball is a little like war…. Ok, that’s a stretch. So I’ll just refer you to my website at www.lisbetheng.com for more info about In the Arms of the Enemy, coming October 1 from The Wild Rose Press. See, I can write a blog post without gratuitous, blatant self-promotion!

Oh, and in case you’re interested, the Yankees lost.

BIO: Lisbeth Eng is a native New Yorker who works in the finance industry by day and plugs her soon-to-be-released World War II romance novel In the Arms of the Enemy every chance she gets. Visit her at www.lisbetheng.com.