Monuments to War and Love 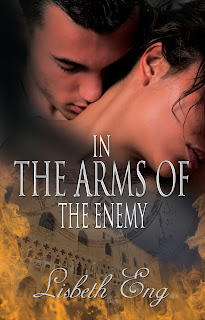 By Lisbeth Eng
My recently published World War II romance novel, In the Arms of the Enemy, presents two conflicting themes: love and war. In fact, I had once considered the title In Love and War for my novel, reminiscent of Francis Edward Smedley’s famous quote, “All’s fair in love and war,” but then discovered that was already in use as the title of a 2001 Hallmark Hall of Fame World War II movie, set, like my novel, in Italy. (A pure coincidence – I didn’t even hear about the movie until after I had finished the first draft of my book!)  I know that titles cannot be copyrighted; I could have called my book Alice in Wonderland had I wanted to, but didn’t want my title so close to a work (in this case a film) with the same setting and similar theme (romance). I credit my late husband Kenny for coming up with In the Arms of the Enemy.  I rather like it, even though at least one other romance novel has the same title. (I didn’t find that out until years later, either.)
But let us return to monuments.  It has recently struck me how many monuments there are all over the world dedicated to wars, or at least to those who have fought them. I live in New York City and have the pleasure of frequent walks through Central Park. I can’t tell you how many war monuments there are, but I have encountered several in my travels.
“The Seventh Regiment Memorial of 1861 – 1865” is a handsome, lofty tribute to the fifty-eight members of that regiment of the New York National Guard who gave their lives “in Defense of the Union”, or so it says on the stone pedestal. I have passed this monument many times during walks through our lovely municipal park, sometimes even on my way to work.  Recently, I stopped to take a closer look.

Standing atop is the stalwart bronze figure of a Union soldier, his rifle at the ready, staring off into the distance. I wonder who posed for the statue. Was he an actual soldier or an artist’s model dressed in an Army uniform? What is he looking at? Is he merely standing guard?  Is he thinking of his lost comrades or is he one of the fallen himself, perhaps reflecting on his short life and the loved ones he left behind.  Maybe he is contemplating his enemies, Confederate soldiers who fought and died for the cause they believed in. On each of the four sides of the base are bronze medallions, emblazoned with the words “Pro Patria et Gloria.” I have never studied Latin, but with my knowledge of French and Italian I am able to decipher a rough translation: “For country and glory.” 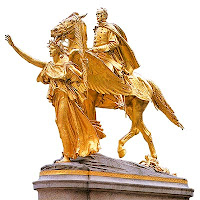 Another famous statue (in Grand Army Plaza, near the southeast entrance to the Park) is that of Union Army General William Tecumseh Sherman, astride his mount, blazing in gilded-bronze and led by the winged female figure of “Victory”. Foreign warriors honored in stone or bronze throughout the Park include Polish patriot King Władysław II Jagiełło and South American military and political leader Simón Bolívar.
Not all statues in Central Park are warlike.  There is the lovely “Angel of the Waters” at Bethesda Fountain, as well as figures of William Shakespeare and Hans Christian Andersen. The Park possesses a representation of Alice in Wonderland and a statue honoring the canine hero “Balto,” dedicated to the sled dogs that led teams through a snowstorm to deliver medicine for a 1925 diphtheria epidemic in Nome, Alaska. 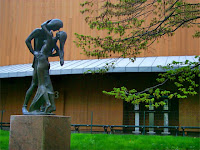 But does Central Park have of a monument to Love?  Outside the Delacorte Theater stands a bronze sculpture depicting Shakespeare’s famed lovers, Romeo and Juliet, entwined in an embrace. As a romance writer, as well as a woman who believes in the power of love (and who is not so enamored of war), I am grateful for that.
In Verona, Italy, the setting of In the Arms of the Enemy, a bronze statue of Juliet resides outside one of the popular tourist attractions of that city, the “Casa di Giulietta,” alleged home of Shakespeare’s heroine. I have been to Verona and have seen this statue and the crowds who pose to have their pictures taken beside her.  It is considered good luck to touch her right breast, and that particular part of her anatomy is a shinier bronze than the rest – likely from the caresses of thousands of hopeful lovers (or superstitious tourists!).
I did not choose the city of Verona as the setting of my World War II romance novel because of Shakespeare’s star-crossed lovers.  I chose it because during the period of the war in which my novel takes place (late 1944), that was the actual location of German military headquarters in Italy. The romantic connection is sheer coincidence.  And I promise that the hero and heroine of In the Arms of the Enemy enjoy a far happier ending than do Shakespeare’s tragic lovers.
BIO: An English major in college, Lisbeth Eng has also studied Italian, German and French. Lisbeth is a native New Yorker and has worked as a registered representative in the finance industry for the past 25 years. Her first novel, In the Arms of the Enemy, is available in e-book and paperback at The Wild Rose Press. Lisbeth invites you to visit her at www.lisbetheng.com.
Posted by Lisbeth Eng at 1:00 AM